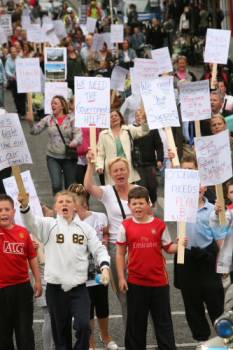 Sorry, it is not profitable to house you

Hundreds take to the streets over the collapse of regeneration plans for some of the most marginalised communities in Dublin.

'We'll be back', promised residents of St Michael's Estate, O'Devaney Gardens, Sean McDermott St and Dominic Street at a protest held outside Dublin City Council at a special meeting held on the evening of May 26th. Plans to redevelop the areas collapsed when wealthy developer, Bernard McNamara, cried off because he wouldn't make enough money.

Property Developer, Bernard McNamara was awarded the tenders on 5 multimillion Euro Public Private Partnership projects to develop five areas of Dublin. Communities who saw little of the Celtic Tiger are the first to suffer from the lack of real development which would have meant better housing, community spaces, creches and mixed living dwellings. The private sector, which has been sold to us by the government as the only solution to our social needs, is unwilling to deliver and now residents are demanding that the Government steps in to fulfill the needs of their communities.

McNamaras are one of the biggest building developers in the state and are one of those who have made massive amounts of money on the backs of ordinary people in 'Celtic Tiger' Ireland. Bernard McNamara, head of the company, (who - not so coincidentally - was one of those hollering around the Dail Bar when Cowen was elected Taoiseach) has a personal wealth of 230million. The company had a turnover of 611million last year. Among the projects they are working on now are the 450million Elm Park residential and commercial development in Dublin 4, a 45-storey tower in Canary Wharf in London, the Burlington Hotel and a large apartment development in Galway. No sign of him to pull out of any of these projects.

If McNamara had begun the redevelopment 5 or 6 years ago and had ended up as a result of the Celtic Tiger making 50 or 100 million extra profit, would they have handed that windfall back to the Council or the local residents saying "we didn't expect to make this much?"


This will not be the last of these protests, watch this space.

two blasts from the past

Those who expect these large-parasitic-companies to act ethically are naive. What kind of contract do the local authorities have with these people? A well negotiated contract with penalties would give them no choice, however, I fear that these Cowboys' legal team may have run rings around the local authoritie's.
Fair play to those who have protested, keep it up and shame these chancers.

by PBPA - People Before Profit Alliance

2 Points worth highlighting:
1. PPPs are not necessarily cheaper than the direct public route. The Comptroller and Auditor General found that schools provided under the PPP route cost between 8 to 13% higher than the traditional route.

2. PPPs that depend on private sector providing funding are subject to market fluctuations. This means that if the private sector cannot identify the required profitability in a project then projects simply will not happen, or in the worst case scenario collapse, leaving communities and those needing the services in a very vulnerable position. For example, the roll out of the cancer strategy has been delayed, reportedly, because the HSE has found it difficult to get the private sector to take on the projects.

Even more worrying are the public housing regeneration projects, where communities that have been promised better housing and community services are being told that the projects are no longer viable because of the collapse in the property market. They are now being left in estates that are being engulfed by social problems as the projects are put on hold. Another concern in the Social Housing Regeneration PPPs is the significant amount of public land that is being handed over to private developers, that could with state investment, be used to address the extensive
housing waiting lists and tackle the vital long-term issue of social regeneration.

It should be noted that the Department of Environment and Dublin City Council have made it clear to communities that the only way their estate will undergo large-scale building and social regeneration is if they adopt the PPP route.

PPP appears to be no longer economically viable and as attractive to developers. Therefore, it is clear that it is the responsibility of Dublin City Council and the Government to guarantee, with the
injections of state investment, the implementation of the physical and social regeneration plans that these communities urgently need. Or will the most vulnerable in our society be left to suffer the fate of
whatever the property developers decide? As the economic slow-down continues will it be, once again, the poorest who suffer most?

Rory Hearne (People Before Profit Alliance)
"The Government must step in and fund the regeneration projects have collapsed as Public Private Partnerships (PPPs). The fact that the viability of these PPPs is in question, highlights, I believe the need for a reappraisal of the use of PPPs, particularly in areas where the public service or infrastructure being provided primarily serves a social equality function."

Former Labour Party spin doctor and arch 'moderniser' Fergus Finlay clearly finds it difficult to acknowledge the true source of the problem: PPP. Careful to sympathise with the private sector he is unable even to begin to admit that it is their very involvement that is the crux of the problem:

More photos from the protest at City Hall on Monday

A section of the crowd

Related Link: http://www.dublinsinnfein.com
Has Dessie moved into town then?

Interesting that Larry was able to be on the protest yet was one of the few Councillors not to speak in the debate inside City Hall.

Dermot Lacey- your one of Pro PPP crew I don't see what your gloating about.

PPP's and all that.

Actually I am a supporter of full rejuventaion of thes areas. I do support any measures that can be used to achieve this but the residents and the needs of tenants and potential tenants must come first.

That is one of many reasons why I have constantly argued for better funding for Local Government - if you want to achieve this welcome on board.

One of the reasons why I am most pleased to be a Labour member of the Council is the unequalled record of the Labour Party on Social and Affordable Housing.

I will give every possible support to the residents of those areas who have been seriously let down by this PPP process.

Typical you dodge the central issue is that PPP as a method to provide essential public services is a joke and you supported PPPs as a model.

There has been no dodge on my part. Where appropriate I think PPP's can have a place. In this instance the PPP's have not worked and it is my job as a Councillor to help find a practical solution that actually resolves the plight faced by the people whose lives have been badly affected.

On balance however I believe that Social and Affordable Housing should be provided for by the State and not be profit driven.

Greed is all you know.

A Case of Profit before People....Sad Sad Mess indeed. What will it take for people to listen,The Irish Government do not care about the working classes and never have,you have the worst polticians imaginable...a greedy heartless state run by greedy heartless Politicians....you are a dispicable nation who care only about economics.

Factually Incorrect. Speaking on Marian Finnucane he cited changes to the original requirements which meant a 25% increase in the build space, and specifically referred to a decision by the council to follow "a different route" related to him 10 days prior to this story breaking. [3]

Factually incorrect. McNamara were selected in February 2007. It took the council 10 years to progress the plans, not McNamara.[2] Also worth remembering that the council rejected the plans of their own officials, so this isn't just a PPP problem.[4]

Factually Incorrect. McNamara only signed contracts on two of these projects, and they are not worth the paper they are printed on because of the changes desired by DCC and An Bord Pleanala to the specifications in the contract.

Overall this is a grossly inaccurate article, especially when one considers that it has been penned by an indy editor.

[2] "McNamara & Co, and its joint venture partner, Castlethorn Construction, had been the council's development partner for only just over a year" http://www.tribune.ie/article.tvt?_scope=Tribune%2FBusi...88321

[4] "In 2004, ...the councilors unanimously rejected plans drawn up by the city's own officials for the estate."http://www.tribune.ie/article.tvt?_scope=Tribune%2FBusi...88321

I have just finished reading "Shock Doctrine" by Naomi Klein. Her book exposes the agenda behind privatisation and schemes such as PP...... as a way to destroy democratic governance by the people for the people, usually instituted via series of shocks - or in the case of Ireland, bribes and blackmail....

By forcing through the handing over those areas of Government Welfare and Social activity in utilities, housing, education, healthcare to private profit driven companies the 'market' gains access to the taxpayers funds and exploits those for purely profit motivations. Such is the agenda behind both the Tara motorway (Halliburton) and Shells Gas terminal in Mayo. Peoples lives matter less than the 'bottom line'.

Shame on the Irish Government for engaging in this process - and shame upon the Irish Middle classes for going along with it, for seeking to profit whilst their fellow country men suffer, to the extent that Shannon is now part of the Criminal and illegal Iraq and Afghan Wars. Complicity cannot be avoided. And in time there will be a reckoning.

South America was the initial crucible in which these nefarious policies were first attempted, and due to the fact that no electorate that comprised a majority of workers and small farmers would sign up to these 'ideas', force was required.

Hence Pinochet et al. Over 20 Million people died in South America as a direct result of enforcement, through stark brutality, through hunger as a result of unemployment, currency collapes etc etc... such is the nature of 'shock doctrine'.

So in Ireland and the UK, rather than use force, a combination of psychology (marketing) and force 'lite' (directed at Trade Unions) in the 80s was utilised : the first stage was to destroy the unions power base, and to destroy the viability of small holding farming, the second stage was to enroll everyone in the idea of owning homes and shares (in privatised utilities) and seeing those homes and shares as 'investments' ...... this was done by making it ever easier to get a mortgage ... which is why the 'sub prime mortgage' crisis eventually caught up with the bankers, (they lent money to people who could not repay, on properties that were worthless - hoisted by their own petard!) and why Governments repeatedly shored up collapsing lenders - to keep the project alive... in spite of it's obvious deadly effect upon people.

Some people call it nationalising debt, and privatising profit. I agree.

The people of Dublin, and of other areas where (relative) poverty is the order of the day are to be commended for beginning to organise a resistance to these policies. They are following in the footsteps of the South Americans, who are now ejecting the IMF, WTO and World Bank from their countries, along with the multinational corporate robber barons.

Adequate Social Housing is a human right, enshrined in the Declaration Of Human Rights, and it should never be subject to profiteering.

http://www.indymedia.ie/article/87727
Indymedia Ireland is a media collective. We are independent volunteer citizen journalists producing and distributing the authentic voices of the people. Indymedia Ireland is an open news project where anyone can post their own news, comment, videos or photos about Ireland or related matters.