If not now when?

Tackling homelessness: A view from the inner city 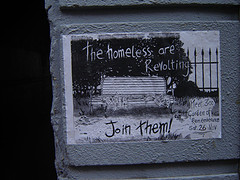 For us it is important to discuss homelessness because it is not just something that we pass by on the streets guiltily ignoring people or handing out a few pence depending on our humour.

It is definitely not something we just read about in reports or newspapers - it is a problem that we have or could experience in the future. Everyone in the media talks about the Celtic Tiger but we dont see it in our areas and we see more people on the streets rather than less and we want to know why.

The following article was written by an Adult Education discussion and research group based in the north inner city. It was a collective effort by Ger, John, Pip, Jonathan Wheelock and Damian.

Homelessness is a terrible situation we have on our streets today. It is an issue all the people have to help to eliminate. There are approximately 5,000 homeless people according to the Jesuit Peter McVerry who provides accommodation and care programmes for homeless young people. When you walk around Dublin you see homeless people in every doorway, up every alleyway- anywhere for a bit of warmth and shelter. Every time you see them they look worse probably because they are taking drugs or alcohol to survive. Also, an awful lot of people die on the streets each year of all ages. You never hear of those people in the media they die and they are forgotten. It is like they never existed and have no identities. A recent report issued by the Simon community noted that 55 people died in its care in 2006 (25 in Cork, 18 in Dublin, 4 in Dundalk and 8 in Galway). The average age of those who died was 42 -under half the average life expectancy of an Irish person. It is time we addressed this problem head on before more people die.

People end up on the streets for all sorts of reasons. You just have to look around you to understand some of them. Around Dublin and the complexes that are dotted around the city centre there are lot of young people who hang around drinking and smoking some hash and other substances. These youngsters are between 12 and 15 years of age and dont really understand the effect of what they are doing to themselves. Soon enough things get out of line and before they can get out of the things they do it is too late. When you think people dont care about you start not to care about them. Some do get the help they need but a lot just fall by the wayside. Some of these girls and boys end up homeless and they have to look for a bed for the night. If you are not one of the lucky ones anddont get a bed its means you have to sleep on the streets in some doorway or run down shed or squat.

We know what this feels like as some of us have had this experience. One of us got thrown out of our mothers house for drugtaking. Sean takes up the story My mother had had enough. I still remember that night-it was cold, very cold. I was walking out the driveway and I just kept thinking where am I going to go? I could walk the streets but you can only do that for a few hours and then you need somewhere to try and get your head down. So you take drugs to block out the cold and when the drugs run out you start feeling depressed and you think no-one wants you or anything to do with you. You feel lonely and unwanted and start to take more drugs to block everything out, to block out the cold. It is not a nice experience. Lucky for me I did get a bed back in my mas a couple of nights later but a lot people dont get a chance.

For the people who are on the streets for a considerable amount of time, for the unlucky ones, it is hard to get paid by the dole and it takes longer to get a flat off the council. Some end up committing crimes or worse. Some people end up on the game and they even get their friends to help out. It seems like easy money but it fucks up their lives.

There are people of all ages on the streets and even whole families and most people in society with their big houses and big bank accounts dont give a damn. The government should be eliminating the problem instead of wasting money on senseless things like the Spire and useless street art. Even though there 57 organisations and 800 people employed to tackle homelessness, consultative fora established in local areas to discuss the issue, and a cross departmental team that reports to the cabinet as well as a large annual budget put aside to tackle homelessness (approximately 81 million euro in 2005) the problems continue. Despite all this colossal activity and substantial expenditures people remain homeless year after year. Our argument is not that the government are doing nothing but they are not doing enough. Surely building enough homes for all the people in such a wealthy society is possible? If we dont more people will die.

http://www.indymedia.ie/article/87114
Indymedia Ireland is a media collective. We are independent volunteer citizen journalists producing and distributing the authentic voices of the people. Indymedia Ireland is an open news project where anyone can post their own news, comment, videos or photos about Ireland or related matters.