Yet again the United States is brazenly pushing for the overthrow of an elected president -in an election which former US president Jimmy Carter said was extremely fair -to be replaced by an unaccountable, un-elected business man who is clearly the pawn of the 1% of Venezuela and the elite and intelligence apparatus of US capital. And regrettably most of the leaders of the EU and our own lackeys have no minds of their own, and acting as the true vassels they are, following the US line. So it is in this vein, that the press release from the workers party brings focus to this completely undemocratic move by the US and Irish government ostensibly for democratic motives! 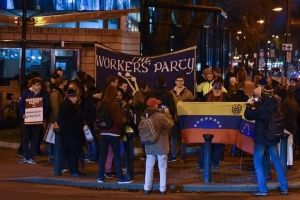 Simon Coveney has, for the first time in our history, given formal backing to United States overseas aggression. Successive governments under Fianna Fáil, Labour and the Green Party have facilitated US overseas aggression by allowing the use of Shannon Airport, but this move marks a new departure, leaving behind even the facade of neutrality.

It flies in the face of the values of anti-colonialism and sovereignty which Irish people are so rightly proud of.

Related Links: Can Venezuela and its neighbours survive the coming war? |
Former world bank employee Peter Koenig gives his perspective on Venezuela situation | Medialink analysis of biased Venezuela coverage by BBC, Guardian and others | the making of Guaido - Max Blumenthal interview | Why must Venezuela be destroyed? | What the Press Hides From You About Venezuela  A Case of News-Suppression | The Saker interviews Jorge Valero, Ambassador Extraordinary and Plenipotentiary of the Bolivarian Republic of Venezuela | Trumps Venezuela gamble is turning out to be a beaten docket by Finian Cunningham

Cllr. Ryan said the move would endanger tens of thousands of lives and destabilise a region:

There is nothing remotely democratic about this power grab. Guiadó comes from a party deeply embedded in the worst violent excesses of right-wing politics in Latin America, and his self-proclaimed transitional programme, for Venezuela makes an explicit commitment to sell Venezuelas national oil reserves to the highest bidder.

Coveney has given his backing to a puppet of Donald Trump, who will ensure American oil companies make plenty money from Venezuelas natural resources. This is a moment of great shame for our country.

The candidate for the European elections concluded:

Ireland has positioned itself within an unsavoury minority of countries. Only 25% of countries around the globe have recognised Guiadó, and these are led by the United States, Israel, right-wing governments in rich European countries, and the United States unsavoury allies in Latin America  led by Brazils Bolsonaro. Many of these have a shameful history of warmongering.

Two Latin American governments, Uruguay and Mexico, have offered to act as mediator. This has the backing of the United Nations. It is astounding that any Irish government would ignore such a possibility, in favour of siding with Donald Trump.

And the Red Cross were having none of it....

The most respectable charities in the world, including the UN, Red Cross and Oxfam, have distanced themselves from the entire Western-backed "aid" initiative in Venezuela, bemoaning its "political tone," while adding that "humanitarian action needs to be independent of political, military or other objectives." None of the slogans for regime change shouted off the stage on Friday are likely to have brought them on side.

The American Destruction of Venezuela - The Real Story

Something to counter the mainstream propaganda on Venezuela

Caption: What Youre Not Being Told About Venezuela Crisis. with Abby Martin

Here's some really good background and analysis too:

Putin has intervened in Venezuela

Putin has had enough of this slow coup.
A red line has been drawn.
A giant Russian cargo plane has landed with aid and troops

Russian specialists are in Venezuela as part of the 2001 military-technical cooperation deal with Caracas that doesnt need further approval, Moscow said after reports of the arrival of two military planes with troops and cargo.

Russia develops its relations with Venezuela in strict accordance with the Constitution of this country and in full respect of its legislation, Foreign Ministry spokeswoman Maria Zakharova said.

The existing deal was ratified by both Russia and Venezuela, and it doesnt require any additional approval from the National Assembly of Venezuela, she pointed out.

The editorial from Strategic Culture:

http://www.indymedia.ie/article/106881
Indymedia Ireland is a media collective. We are independent volunteer citizen journalists producing and distributing the authentic voices of the people. Indymedia Ireland is an open news project where anyone can post their own news, comment, videos or photos about Ireland or related matters.